What’s the deal with 30 Minutes Missions?

What’s the deal with 30 Minutes Missions?

If you’re wondering where these 30MM model kits came from and what they’re all about, look no further!

If you’re wondering where these 30MM model kits came from and what they’re all about, look no further! Bandai has broken into the non-Gundam robot model kit scene and they’re doing it in typical Bandai fashion—with an emphasis on easy intuitive builds and high levels of post-completion customization potential! We’ll update this post with new information and release information as products are announced, but for now, here’s a full breakdown:

Because it’s very expensive to produce anime and get it in front of international viewers, Bandai passed that over and wrote some lore Bungie-style. Long story short, an interdimensional portal appeared in space and wouldn’t you know it, aliens started attacking Earth. (Of course, the aliens looked like Earthlings so they used equipment very similar in nature, which is convenient. Let’s just roll with it.)

Earth fought back using the EXAMAC machines they designed, the Alto and Rabiot, against the Byron army’s Portanova and Cielnova machines. Of course the landscape of battle is ever-changing, so the machines had to be heavily customizable in nature.

So those two paragraphs are literally all you need to know to justify the existence and style of these model kits. For starters, these kits are… for starters! The layout of the runners is so intuitive that you could probably build it without using the instruction manual. Just look at how the runners are laid out: 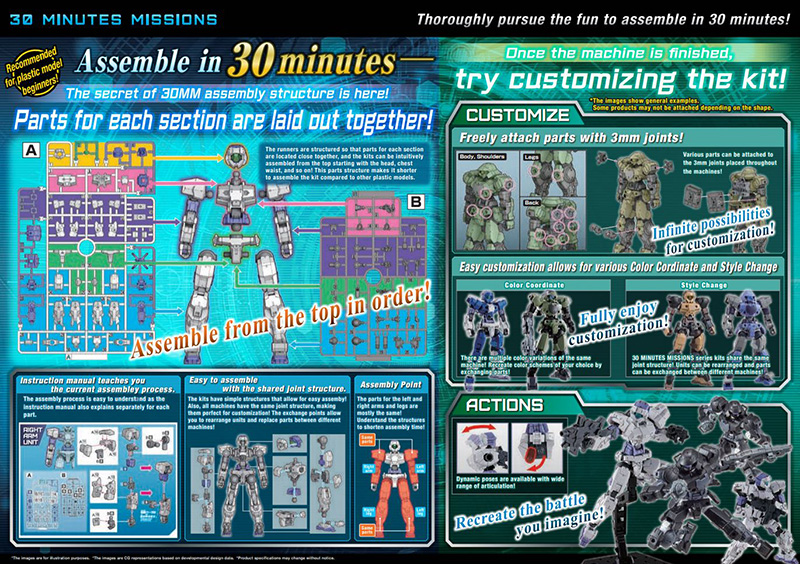 Every variation comes in at least 2 color options and all the kits and option sets use the same diameter connection ports, so there is an infinite number of combination possibilities. In the graphic below, you can see just a couple of the ways you can modify your kits from simple to more extreme:

Now keep in mind, even though that graphic says “HARD,” there is no painting or gluing required to achieve the displayed results. These are a perfect way to get a start on ideas for customizing without breaking out the paint, glue, or plaplate.

Not only is the line made up of customizable robots (about the size of small high grade Gundams), but it has also brought about a renewed focus on option weapons and effect parts! There are flight units, tanks, gunfire effects, and diorama bases that allow you to recreate a huge variety of scenes with minimal extra effort!

So now that you have all this information, where do you begin? Literally anywhere you want! The entire 30MM line is perfect to jump into and see what it’s all about. Whether you’re grabbing an Alto and one armor set or army building 30 Cielnovas to stage an epic fight, there’s no wrong way to approach this line. It’s always a perfect time to try these out!