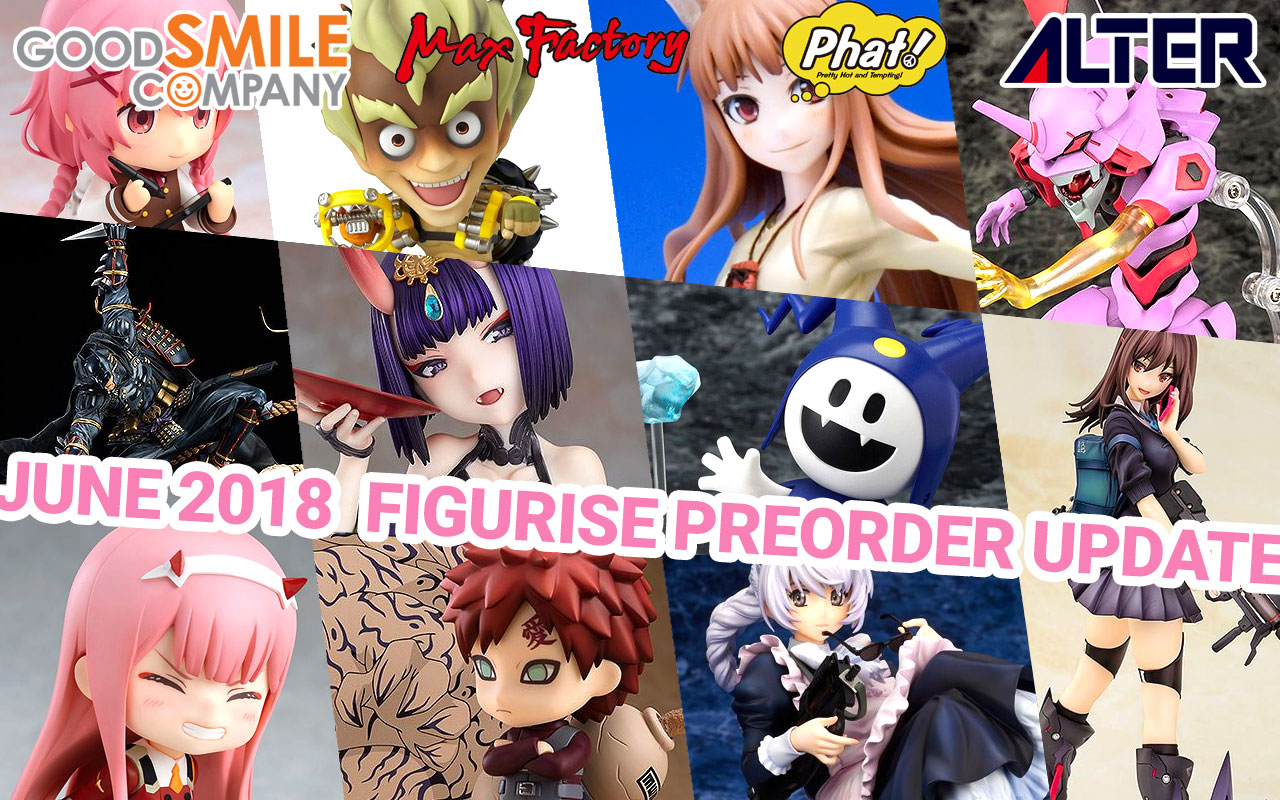 Check out all the latest preorders on Figurise!

Check out all the latest preorders on Figurise this week!

From the popular smartphone game "Fate/Grand Order" comes a scale figure of the Assassin servant, Shuten-Douji, based on her second ascension appearance in an original kneeling pose. The loose outfit that shows off her soft skin and beautiful curves has been detailed to capture the designs from the series as faithfully as possible, with the textures of the long sleeves carefully tuned to provide a soft, flowing appearance. Be sure to add her to your collection and your heart is sure to melt each time you look at her captivating expression! Height: 155mm

From ATLUS's popular RPG series "Shin Megami Tensei" comes a rerelease of the lovable ice spirit, Nendoroid Jack Frost! He comes with a variety of optional parts including a fragment of ice that he can create using his magic, as well as a separate set of arms to pose him using the magic. He also comes with an additional set of legs that allow you to pose him sitting down. Keep the adorable Jack Frost by your side to cool off whenever you need! Height: 100mm

EVA01 joins the Parfom series in its Awakened state! Phat! Company teamed up with the garage kit dealer 'RyunRyunTei' Toona Kanshi to codevelop a new generation of action figures known as the Parfom series! The next figure to join the series is the Awakened version of Evangelion Unit-01 from the "Rebuild of Evangelion"! The Parfom's unique chibi appearance and articulation allow the EVA01 to be posed in all sorts of scenes from the series, and the color scheme from the movie has been faithfully preserved! The arm that was regrown after being ripped off is also included, and makes use of a translucent material to capture the appearance from the movie! Height: 140mm

From "Full Metal Panic! Invisible Victory" comes a figure of Teletha Testarossa! The design is inspired by the maid outfit she wore in "Dancing Very Merry Christmas". It well expresses the comfortable looking outfit with its soft ripples and the floating pose. The sunglasses that can't be forgot to play a "cold-blooded terrorist" are in on hand and a charming expression is on her face. The submachine gun in the one hand is also shapely made. The contrast of the hard mechanics and adorable figure body result in a figure that perfectly illustrates the essence of Full Metal Panic. Height: 220mm

A moment of time, captured in perfect detail. From the animated film "Ninja Batman" comes a 1/6th scale statue of the main character, Ninja Batman. The figure is based on an original art piece by character designer Takashi Okazaki, and will be limited to 1000 pieces worldwide. Standing approximately 700mm in height, the overwhelming presence of the figure cannot be denied, and the fabric of his outfit as well as the chainmail have been sculpted with careful attention to the texture together with intricate airbrush paintwork. The pose features Ninja Batman with his Sengoku Batman armor removed, jumping up into the air capturing a dynamic moment in exquisite detail for fans to enjoy in their collection. The cut rope that swirls around the main figure is sculpted with a waving motion as if just cut, further adding to the depth of the movement captured with the figure. The base of the figure is designed to look like a crumbling roof of a Japanese castle to capture the setting of the series, with each of the tiles and the wooden frame beneath sculpted with great care. The finer features of the figure beg to be looked at in close detail, and no matter what angle you choose to look from the figure boasts superb sculptwork. In addition, we also have a similar figure of Sengoku Joker currently in production, that is designed to be displayed as a set together with this figure! Whether you choose to display both or just Batman, be sure to add this piece of art to your collection! Batman Ninja: TAKASHI OKAZAKI Ver. is a high-quality art piece, and only 1000 will be made available worldwide. Each product will be engraved with a unique serial number. (Serial numbers will be distributed at random. You cannot select which number you will receive.) ■Batman Ninja: TAKASHI OKAZAKI Ver. Size Comparison Page http://special.goodsmile.info/batmanninja_size/en/ Height: 700mm

From the popular anime series "DARLING in the FRANXX" comes a Nendoroid of Zero Two wearing her uniform. She comes with three face plates including a fearless smile, an innocent smile with closed eyes as well as a sidelong glance with an open mouth that can be used to display her sucking a lollipop or with her tongue out! The bacon from the start is also included allowing you to recreate the iconic scene bacon eating scene from the series! Her jacket and hat are also included as optional parts for even more posing opportunities! Height: 100mm

From the popular anime series "Comic Girls" comes a Nendoroid of the 4-panel manga artist "Chaos", also known as Kaoruko Moeta! She comes with three face plates including a cute standard expression, an expression based on her "abababa" line from the series as well as a high-spirited energetic expression. Optional parts include a tablet for her to draw her manga, as well as two different versions of the cat that looks similar to her, Nyaos-sensei! Be sure to add the cute and comical manga artist dormitory to your Nendoroid collection! Height: 100mm

From the popular anime series "Naruto Shippuden" comes a Nendoroid of the Fifth Kazekage, Gaara! He comes complete with his iconic sand gourd which also comes with sand effect parts which can be attached to the opening to display him using his sand manipulation techniques. Two large sand parts are included which can be used on other Nendoroids to recreate his Sand Coffin technique, or instead be placed in front of him to display him defending himself with his Ultimate Defense technique. He can also be posed shaking hands with Naruto to recreate the scene after Naruto and the others rescued him. In addition, a clear sheet featuring his tailed beast, Shukaku, is also included to display by his side! Height: 100mm

From the "ARMS NOTE" series created by illustrator Fukai Ryosuke comes the first in a series of figures that combine cool and cute - a 1/7th scale figure of Bionic JoshiKosei! The intricate design work of the weapons and equipment as well as the slender and beautiful frame of the young high school student have been captured in beautiful figure form for fans to enjoy by their side! The skirt part of her uniform can be removed, and the blades of her bionic boots can be deployed allowing for a variety of display options! Height: 240mm

Spinning out of the phenomenal light novel and manga series – Okami to Koshinryo – or Spice & Wolf, written by Isuna Hasekura, with illustrations by Jū Ayakura. Inhabiting this unique fantasy world is HOLO, a young wolf harvest diety – a character popular enough to win the annual “best heroine” award from publisher Takarajima‐sha. With her cute wolf ears and elegant dress, Holo stands 7 2/3” tall and comes with a “flocked” base to represent the wheat fields of her homeland. Height: 215mm

From the globally popular multiplayer team based shooter Overwatch®, comes the eighth Nendoroid figure from the series, Junkrat! His artificial arm and leg, the multiple patches on his pants and various other details from his Classic Skin have been carefully included on the Nendoroid design! Nendoroid Junkrat's neck features a double-joint allowing for more acrobatic poses as he propels himself through the air! The RIP-Tire on his back can be detached and comes with its own stand to pose it as if moving along as if Junkrat has used his ultimate ability! A concussion mine part as well as the switch to detonate it are included allowing him to be posed waiting to trigger the mine on an unsuspecting enemy. His steel trap is also included and can be opened and closed allowing you to display heroes trapped by the metal-toothed trap, and can even be held in his hand to recreate his Vaudeville emote in Nendoroid size! Be sure to add him to your collection and display him with the previously announced heroes in the Overwatch® Nendoroid series! Height: 100mm

Let us know what you're most excited about!