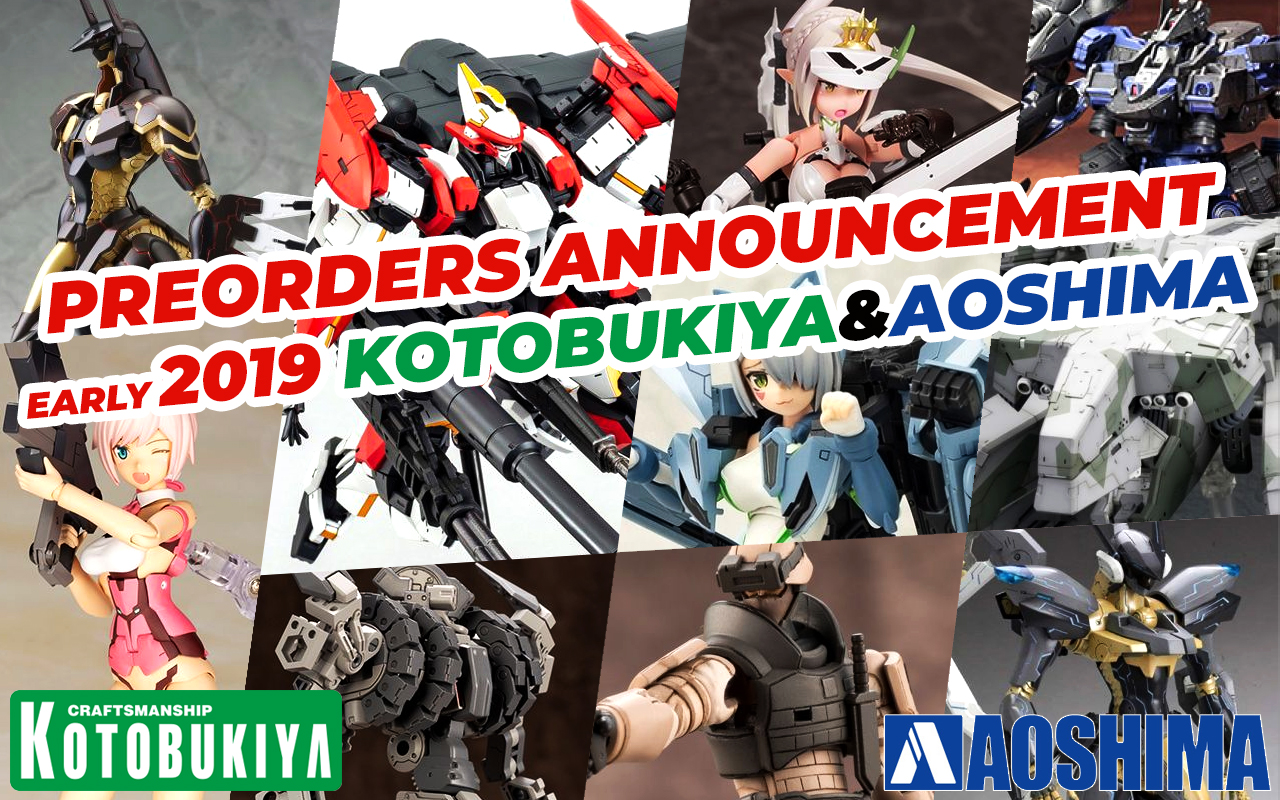 Bandai isn't the only company rolling out some serious model kit goodness later this year and early next year; check out what two other big players have to offer! All of it is available for preorder now!

Bandai Hobby announced some pretty amazing stuff for the winter, but don't let that overshadow everything that Kotobukiya and Aoshima have announced as well! Here's all the stuff we just opened preorders for that isn't from Bandai!

We're going to be very real with you: we know there is a canonical reason within the Macross universe that this girl has cat ears and a tail. We know that but we will not investigate or explain it, because it will not affect whether or not any of you or us or anyone likes this catgirl/planegirl. She even comes with a :3 face, if you can believe that or want to believe it.

Megami Device model kits are awesome; this is known fact. They're very intuitive and make great figures once they're built. We don't need to harp on this any more though and won't waste any more of your time, because we NEED you to check out the Dragunov-style sniper rifle on this thing that is also an AX. The Ax/Rifle is the coolest thing and no one can make us stop talking about it.

Zone of the Enders: Anubis

Look at this thing! This guy is regal and tough, and if you know anything about Gundam Planet, it's that we love things that are Regal and/or Tough. We're very stoked that Koto has decided to reissue these kits, because there's definitely demand for them--and why wouldn't there be! Look how Tough and Regal it is!

Zone of the Enders: Jehuty

While not as Regal as Anubis, Jehuty certainly is certified Tough, so we're about it. You probably shouldn't get one of these kits without the other though, cause then it will get lonely and you wouldn't want that.

It's almost as if a Koto executive somewhere went through their archive of past kits and put together a Greatest Hits list and then decided to reissue them all at the same time. Honestly that's a very smart business strategy that some other companies could take a page from!

This is pretty much like if someone combined the Materia and the Innocentia and then gave them both way too many animal accessories like ears and teeth and stuff. If you're interested to see everything offered in this kit, head over to the item page for the full breakdown!

We're going to be honest, we're not very familiar with Armored Core Verdict Day, but we do think this blue nightmare is one of the most impressive Armored Core kits Kotobukiya has put out over the years!

This thing is absolutely terrifying! You can change it between normal and "freakishly lanky" mode, and it can even be turned into a biped dinosaur-looking thing! It even has additional articulated arms that can come from its back, which is only a little unsettling.

Oh man, now they're releasing models of the guys from Full Spectrum Warrior! We love all these deep cuts! This very tactical-looking humanoid desert soldier is joining the 1/24 scale lineup of Hexa Gear model kits, complete with a full array of accessories that will be compatible with other Hexa Gear governors!